In March 2010 we opened our THIRD Blaze Martial Arts and Kickboxing school in Bracknell / Binfield at The Brakenhale School, Bracknell, Berkshire. Our Kickboxing Bracknell school has been one of our greatest successes as it was the first time we employed a staff member to co-run the school with us and it was a great success. Nowadays our Bracknell Kickboxing and Martial Arts school is used as a platform to develop our coaches, instructors and staff members with a view to them one day opening their own school or a Blaze Martial Arts Franchise school.

Our Bracknell Kickboxing and Mixed Martial Arts school teaches Kickboxing as its base but also follows a Mixed Martial Arts programme to include other styles and disciplines such as Karate, Tae Kwon Do, Jiu-Jitsu, The Keysi Fighting Method, Muay Thai Boxing and some Reality-Based systems designed more for Self Defence / Self-protection on the street. 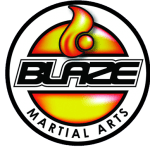